Who Put the I in Responsibility 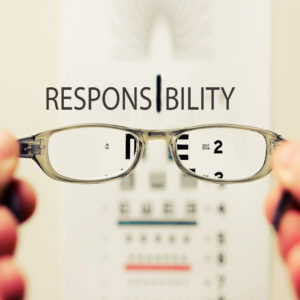 Who Put the I in Response-ability

Are we really responsible for our own mental-health?

Back In 2017, during a once yearly gathering of mindful, yet still very human, friends, colleagues and strangers, I was listening to one of the convention’s speakers who was quietly reminding us all of the virtues of a quiet mind, when through the noise of my thoughts, I stumbled across a word that tripped me up, and out, quite unexpectedly and it’s had quite an impact, hovering around in my conscience ever since.

The word was responsibility

It struck a chord, because at the time, I really wasn’t connected to myself or my journey in life. I had found myself stuck, stuck in a world that wasn’t responding in a way I really, really, needed it to at that time. I was essentially in the throes of depression.

Depression is a warning sign, one that states “However you are seeing the world today, beware, it is not healthy for you at this time” and we must take heed of what our feelings are telling us, the sooner the better, but we must try to move away from current thinking, move our beliefs and change without blame.

Why do we blame anyway it only creates victims of ourselves?

Our western culture is built around blame and our environment (that of our Earth and our social structure) suffers for it. Of course, it isn’t something that we can blame for everything, as such. But it is a start. And I have come to wondering about the word responsible again. How does it account for itself?

In looking to find the definition of responsibility we find it easy. Our dictionary defines it using words like Duty and accountable…Responsible! Blame! When we ask about the origin of the word we find out that it was only first used in the sixteenth century.

But isn’t this the bedrock of morality? Why so late to the party?

The seemingly Hermeneutic word “responsibility” first appears (as recorded text) according to Karlheinz Stierle, in the same year that Statesman Alexander Hamilton contributed to the text of the Federal Constitution of Philadelphia. He also states, in the opening paragraphs of his book called “Interpretations of Responsibility and Responsibilities of Interpretation” that:

The closer you look at the word responsibility the more distantly it looks back at you.

Quite a mouthful huh.

His words state that the Ministers are no longer responsibleto the King but to the nation as a whole. The new idea according to Karlheinz Stierle’s research from 1994 stemmed from Montesquieu’s De L’esprit des lois (1748) particularly from the concept of the social contract between sovereign and society as it had been worked out in Rousseau’s Du Contrat social (1762)

What we can take from this is that any blame would now stop at the Minister’s door and not the Kings. It was now, according to that particular reading, the responsibility of the Ministers.

Responsibility it seems, had been made a tool that one can utilize when cutting the cord of culpability in any situation. All it would surely require for the idea to stick would be a lesson (to the bearer) in how to look after any said responsibility? Karlheinz goes on to state that the word was later used (in 1804) to bridge a situation of law where there was no apparent contract. A moral stance it seems had been born. We are now:

Responsible for our own demise

Jan Jaap-Bouma, a highly respected contributor (one among three editors) who produced a market leading, although hidden book, called “Sustainable Banking” (2017) refers to the word responsibility as springing from the Latin “respondere”, this he states as meaning “promise in return”. The book was produced by Deloitte, arguably the largest professional service network in the world who, in the FY 2018 earned £43.2 billion. Now there’s a responsibility. Credit must go to the book, as upon reading, it seems that responsibility is something they are taking seriously and are trying to provide route in aligning banks and finance toward environmental and social stability. His contribution that: they have a responsibility to the economy and shareholders (cough in my soup) to provide investment strategy into saving the earth and humanity. Hurrah! I made that line up.

Maybe though, Jan hit the nail on the head. He basically states that through accepting a contract of responsibility we promise something in return for something else?

With no true reference explaining exactly how the word responsibility was formed over time (other than three seemingly conflicting examples online neither recognizing the other) I am happy to accept Jan’s example, it being exacted by some assumedly well-paid editors. If it is the correct assumption then:

what is it that we’re giving exactly, having received this responsibility?

It seems to me, if we wish to dig down and understand what’s happening here, we need to remove the “I” from responsibility and give back the “e” and “a” to response and ability. Here we find an “ability to respond”. Looking at it from the point of “Response-able” we can see a clearer picture. We can give a response.

When in a state of depression, I can pretty much state, as many would, that – “I’m just not very response-able at present”. If I could respond better I would, but whilst depressed it’s not as simple as that. This seems to make sense, and in suggesting that one is not able, we “diminish our responsibility”.

Diminished responsibility is something a court of law may conclude in any case where a person has acted from a position where they were unable (due to mental health issues) to act in line with our society’s expectations. It is a valid response in law whilst addressing a world that puts us under pressure, however, depression is rarely sighted as a reason to fail in our responsibility to act in line with these expectations. As such we are expected to toe the line; do what’s right, pay our bills, turn up at work, mother your child, put out the trash, etc.

Going back to contract- Promise in return. What does this mean?

To me it seems to state that our government, which means our society, us, have a response-ability to teach our children, our teenagers, our lost and suffering, our adults and elders how to go about surviving in this modern, madcap world so that they can respond. We cannot expect anyone to respond with ability unless we teach them, can we? How can anyone do something they’ve never been shown or taught without a natural tendency. We are past natural learning curves, we don’t have the time, we must teach of Love and taxes, friendship, business and support, relationships, environment and sex. We must teach of how to adapt when on our knees. We must teach of the things that matter, but most of all, more than anything else we must teach that when we are not able, due to depression or any mental illness, when we are lost not knowing how to find another way, that we speak up and say…

I’m unable to give the correct response to life at the moment.

And if we are unable to speak up, unaware of our own diminished responsive ability we need to know that there is someone able that can respond for us.

I have hated the word since I was young, I don’t know many that haven’t, most of us still do at least sometimes. The truth is that it stands as a reminder that we are all under a kind of contract, one of life and love and where one person is unable we need another to step up. I have been both able (to a commendable degree) and unable (to an embarrassing fault) and have lived with the highs and lows that come with each. As such I must in this instance accept some response-ability and put myself back in the game.

Because, having lived, worked, earned, bought, sold, encountered, travelled, loved, longed, hugged, fucked and fucked up, a lot, I can tell when I’m not responding well to life and I owe it to myself and everyone else, to just say so. In living this life, I have learned, I am able to respond and if I can’t, I have a network of people who can hold my ground whilst I adapt. So perhaps we could do with seeing it like this.

As a society we are responsible, as individuals we have great capacity to respond. We are just beautifully human

If responsibility depends on I

Then only together can we put the I in responsIbility.

As individuals we reserve the right to take I out again.

I write on subjects that intrigue me. They either speak to mental health, physical health, writing or my pet project - The Twenty-first Tribe.